Clay Aiken spoke to Diane Sawyer on Good Morning America this morning about his decision to come out of the closet. 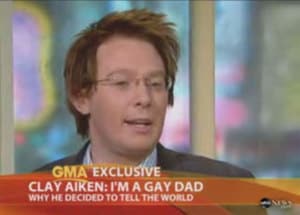 Others have been speaking out as well.

American Idol judge Simon Cowell joked, “Wow, that’s a shock. It’s like being told Santa Clause isn’t real — unbelievable,” then added, “Good for him. If he said it, it’s the right thing for him. Good for him. I don’t think anyone cares. Let’s face it. It’s 2008. You know, who cares?”

Lance Bass told People, “I’m happy for him. It’s good to see someone actually being true to who they are. I think it’s something that’s nice to share with the world, because it really does relieve a lot of pressure off of you,” then joked, “Coming out on the cover of PEOPLE magazine? I mean, c’mon. Can’t he be just a little bit more original?”

Charlie Herschel, who’s a contestant on the upcoming season of Survivor, talked to the Advocate about how he struck up an IM relationship with a then-closeted Aiken last summer: “Well, he’s not a close friend of mine. We’ve only hung out, like, twice. I fell out of touch with him for a little while, but there was a point when I was in law school that I was on IM almost every day, so we used to IM almost every day. But we haven’t spoken since I got back from Africa, so he doesn’t even know I was on Survivor. But there was a point, up through when I left for Survivor, where we were in pretty close contact…I was pretty surprised that he came out, just because he seemed pretty adamant about being private about that sort of stuff with the public.”

And do you remember John Paulus, the former Green Beret and real estate agent who in 2006 claimed he’s had sex with Aiken? He released a statement and is shutting down his Aiken blog: “Some have called or emailed me asking if I feel vindicated. For me, this isn’t about vindication. The days of me seeking such have past. This is about Clay Aiken and what this means for him. Today, Clay Aiken has just had that 10 ton weight lifted from his shoulders. He doesn’t have to hide or live in fear of anyone knowing his secret. He can be happy living openly and honestly and for me this is what’s most important. I hope that Clay fans will forgive Clay and accept him.”