A deal has been reached, according to reports. It now goes to Treasury Secretary Paulson. 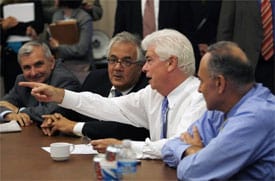 Wall Street Journal: “The lawmakers didn’t offer details of the plan, but the proposed bill would approve the fund, but would pay the money out in installments, with $250 billion in bailout funds available immediately, people familiar with the matter said. Lawmakers also agreed that limits on “golden parachutes” and use of warrants would apply to all companies, these people said. However, changes to bankruptcy laws still unresolved. The details still need to be ironed out with the White House. Republican Sen. Robert Bennett of Utah expressed optimism that lawmakers have a ‘plan that will pass the House and Senate.’…’We came to agreements on a lot of the important issues,’ House Financial Services Chairman Barney Frank (D., Mass.) said at a press conference featuring most of those who attended the meeting. Sen. Bob Corker (R., Tenn.) said: ‘I believe that we will pass this legislation before the markets open on Monday.'”

Previous Post: « McCain Campaign Looking into Delay of VP Debate as Well?
Next Post: Clay Aiken Talks to Diane Sawyer About Decision to Come Out »