A gay man is in critical condition a week after being stabbed seven times by a gang of youths in east London. Police are treating it as a homophobic crime: 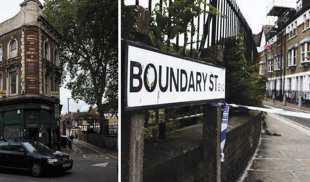 “Detectives are treating the street attack as attempted murder. The 20-year-old, known as Olly, was stabbed seven times behind Shoreditch Church on his way to a ‘gay friendly’ pub. Both Bethnal Green & Bow MP George Galloway and the leader of his Respect group on Tower Hamlets council have appealed for calm following last Thursday’s stabbing…Olly had been walking with a woman companion to the George & Dragon pub in Hackney-road, where many of the gay community meet, when he was attacked in nearby Boundary-street on the corner of Austin-street, around 11pm last Thursday (August 28). He was hounded by a group of five youths, then hit over the head with a glass bottle before being stabbed seven times in the back and torso. He had life-saving surgery at the Royal London Hospital in Whitechapel the next morning, but still remains in a critical condition one week on. The stabbing is also being linked to an assault in the same area 24 hours before when a couple were kicked and punched by youths.”

Said Detective Inspector Howard Way: “We are investigating this attack as attempted murder. What we’re concentrating on is tracking down and bringing to justice the people who committed this evil crime.”

Added MP George Galloway: “This is a sickening and vile assault. A near fatal knife attack on a defenceless man is horrific enough. The fact that this also appears to be a homophobic hate crime compounds the evil.”