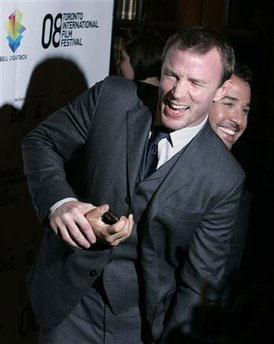 “I think her brother wrote that book about experiences he had quite a while ago. Guy’s not like that. He’s got a better sense of humour than that, he doesn’t need to make jokes about buggery.”

According to The Guardian though, he knows gay subtext: “I’ve never seen a gangster thriller punctuated by quite so much homoeroticism. Gerard Butler plays One Two, a rugged beefcake who steals millions of euros from a Russian oligarch and football club owner, Uri Obromavich (Karel Roden). When One Two is not tied to the bed and tortured by Uri’s humourless Soviet henchmen – stripped down to their leather pouches – he is being hit on by his best friend and fellow gang member, Handsome Bob (Tom Hardy). This particular shock revelation prompts a horrified Butler to slam on the brakes nearly catapulting his ex-best friend through the front windshield of their 4×4. ‘You’re the only one who didn’t notice’ explains his new best friend, Mumbles. “So tell me, what did you do with Bob last night…” Well, can you guess? And so it goes, a mesmerising swirl of gay insults and imagery – there’s even some man-on-man ballroom dancing.”

Incidentally, Ritchie (pictured above with Jeremy Piven at the RocknRolla premiere) responded to a jibe from Mike Huckabee the other night at the RNC about his wife:

“Palin was named McCain’s running mate last week just days before details of her 17-year-old daughter’s pregnancy was revealed – leading to a media frenzy. Conservative Huckabee addressed the fuss, stating, ‘The reporting of the past few days have proven tackier than a costume change at a Madonna concert.’ Ritchie has been left defending his touring wife at the Toronto Film Festival in Canada – and he’s having a laugh at Huckabee’s expense. He says, ‘Someone had to tell me who Mike Huckabee was. I gather he had some disparaging remarks to make about my wife… and I really like her costume changes.'”