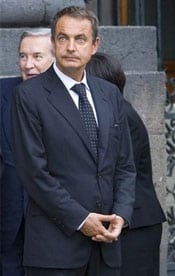 John McCain’s gaffe yesterday on Spain — in which he responded to a question about our U.S. ally with an answer usually reserved for countries about which our relationship is much less clear — is more astonishing given his own campaign’s admission that his answer was intentional.

Asked whether or not he would invite Prime Minister Zapatero to the White House, McCain responded:

“Honestly, I have to analyze our relationships, situations and priorities, but I can assure you that I will establish closer relationships with our friends, and I will stand up to those who want to harm the United States.”

There’s much more to the interview, and you can listen to more of it, AFTER THE JUMP, but you can imagine what conclusions the Spanish press has already drawn about McCain’s policies with regard to that country.

Even more shocking is the McCain campaign’s response to media frenzy around the issue. Rather than say McCain just wasn’t paying attention to the question, or he didn’t hear it right, “McCain’s campaign insists he was aware it was Spain that was being discussed” according to Politico’s Jonathan Martin.

Watch CNN take it all apart, AFTER THE JUMP…