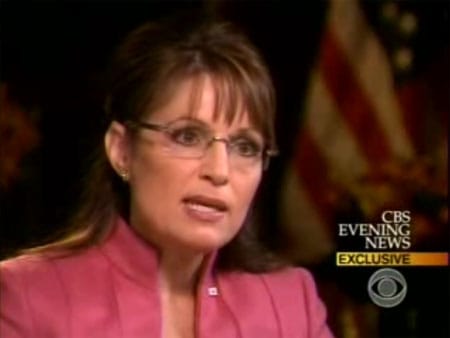 Wow. Certainly a disastrous 24 hours for the McCain campaign.

Katie Couric’s interview with Sarah Palin reveals exactly why they’ve been keeping her from the media. She doesn’t know what she’s talking about. Whether she is or not, this interview makes her look like she’s in way over her head.

COURIC: You’ve said, quote, “John McCain will reform the way Wall Street does business.” Other than supporting stricter regulations of Fannie Mae and Freddie Mac two years ago, can you give us any more example of his leading the charge for more oversight?

PALIN: I think that the example that you just cited, with his warnings two years ago about Fannie and Freddie–that, that’s paramount. That’s more than a heck of a lot of other senators and representatives did for us.

COURIC: But he’s been in Congress for 26 years. He’s been chairman of the powerful Commerce Committee. And he has almost always sided with less regulation, not more.

PALIN: He’s also known as the maverick though. Taking shots from his own party, and certainly taking shots from the other party. Trying to get people to understand what he’s been talking about–the need to reform government.

COURIC: I’m just going to ask you one more time, not to belabor the point. Specific examples in his 26 years of pushing for more regulation?

PALIN: I’ll try to find you some and I’ll bring them to you.