CNN reported last night that the McCain campaign is also looking into the possibility of delaying the vice presidential debate if there’s no bailout deal by Friday: 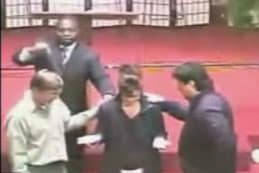 “In this scenario, the vice presidential debate between Joe Biden and Sarah Palin would be rescheduled for a date yet to be determined, and take place in Oxford, Mississippi, currently slated to be the site of the first presidential faceoff this Friday. [Senator Lindsey] Graham says the McCain camp is well aware of the position of the Obama campaign and the debate commission that the debate should go on as planned — but both he and another senior McCain adviser insist the Republican nominee will not go to the debate Friday if there’s no deal on the bailout.”

Given Palin’s witless performance in last night’s Katie Couric interview, it’s no wonder this shifty maneuvering is going on.

Meanwhile, the second half of Sarah Palin’s Katie Couric interview is scheduled for tonight. Last night, Keith Olbermann took apart the latest round of Palin revelations, including her blessing in Wasilla three years ago by a Kenyan witch doctor.