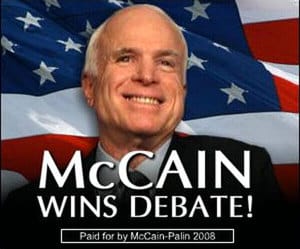 John McCain has decided to participate in the presidential debate — his delay tactics haven’t worked — and he’s already declaring victory according to ads placed on websites.

“Although the fate of tonight’s presidential debate in Mississippi remains very much up in the air, John McCain has apparently already won it — if you believe an Internet ad an astute reader spotted next to this piece in the online edition of the Wall Street Journal this morning. ‘McCain Wins Debate!’ declares the ad which features a headshot of a smiling McCain with an American flag background. Another ad spotted by our eagle-eyed observer featured a quote from McCain campaign manager Rick Davis declaring: ‘McCain won the debate– hands down.'”