Bosnia’s first gay fest, which I reported yesterday was the target of attacks by fundamentalist Muslim groups, has been shut down: 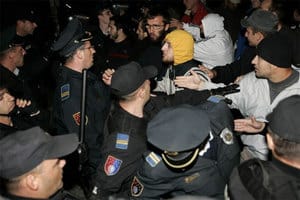 “‘We cannot guarantee the safety of visitors,’ said organizer Svetlana Djurkovic. ‘The festival is closing down.’ Djurkovic heads a group that promotes the rights of gay, lesbian, bisexual and transsexual groups. About 250 people attended the opening of the festival of art, film and workshops about sexual minorities, which was due to last four days. Police clashed with the attackers and said they would press charges against five men. Srdjan Dizdarevic of the Bosnian branch of the Helsinki Committee for Human Rights said the attacks violated ‘civilized standards.’…’The attacks hoped to annul individuality in society. The attackers used fascist rhetoric,’ Dizdarevic said.”

Amnesty International slammed Bosnian authorities for not doing enough to protect those being attacked.

A Reuters video report about the protests and gay fest, AFTER THE JUMP..