In attacking Barack Obama’s past efforts on sex education, McCain is actually defending sexual predators, as Obama’s efforts in this area were designed to protect children from such heinous criminals.

However, as many have noted, the ads are simply designed to send the disgusting and misleading message (that gays have been the target of for years), that Obama wants to sexualize the lives of young children. 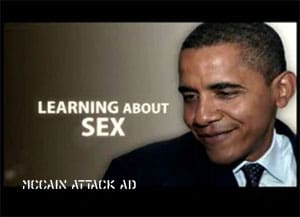 The HuffPost notes: “More odious, however, it’s also an example of the McCain campaign playing the race card, activating stereotypes of the black man — seeming to gaze dreamily at something below (or shorter than) him — as driven by sexual appetite.”

It’s perhaps McCain’s lowest and most despicable attack yet.

The Obama campaign has responded with a statement. Said spokesman Bill Burton: “It is shameful and downright perverse for the McCain campaign to use a bill that was written to protect young children from sexual predators as a recycled and discredited political attack against a father of two young girls – a position that his friend Mitt Romney also holds. Last week, John McCain told Time magazine he couldn’t define what honor was. Now we know why.”