Billie Jean King has clarified statements that she made to the New York Observer regarding Sarah Palin. I reported on her quote this morning. 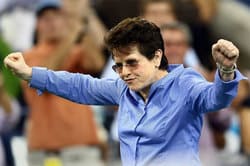 Said King in a statement to 365gay: “Last Friday, a reporter from the New York Observer asked me what I thought about Sarah Palin. I told her I thought Sarah Palin was honest and real. I believe that. But, that in no way should be viewed as an endorsement of any kind. I oppose many of the positions of Sarah Palin, particularly those tied to the LGBT community. I am supporting Barack Obama and, in fact, I have lent my name to both Women for Obama and the Obama LGBT Steering and Policy Committee.”