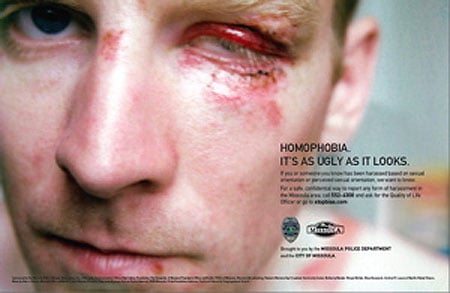 Missoula, Montana (a town close to my own heart) has launched a campaign to stop bias-related crime in the city. It’s being spearheaded by the city’s police department with a website along with billboards and radio spots. 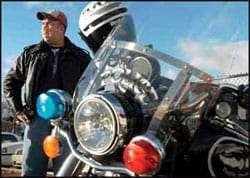 New West Missoula reports: “The effort has its roots in the work of a Missoula Police officer who reached out to the lesbian, gay and bisexual community in Missoula after some gays—and young men and women perceived to be gay—were savagely beaten in unprovoked attacks. The officer drew up a form for reporting hate crimes and bias, said Missoula Police Chief Mark Muir. In those early days, the department received two complaints, but since then, none. ‘We had a concern that that happens when something isn’t well enough known,’ Muir said. Sgt. Casey Richardson and Spider McKnight of the local ad agency Salt Studio, as well as others, raised money, built a Web site and otherwise pushed forward the idea of publicizing the department’s efforts to bring bias out of the dark. In the end, the group raised $12,000 to fund an advertising campaign…Gender issues were a focus of the most recent campaign. Muir said the departments wants to address racial bias, too.”

Added Muir: “We’re looking forward to improved reporting on these issues. That’s what we’re leaning toward tackling, as a bias. We want to make sure we’re rounding the bases to fight these bias issues. It’s unconventional for a city of a law enforcement body to do something like this. The biggest obstacle would be the financial side of it. We wouldn’t be able to do it without the community.”

As a side note, the gay officer who initiated this whole campaign, Scott Oak, we last heard went off to serve in Afghanistan in 2007 (no word if he’s back), leaving behind his partner of 12 years and the teenage foster son they’re raising together.