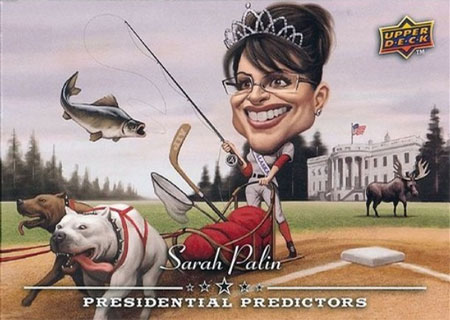 You may remember the set of Presidential Predictor trading card that Upper Deck put out earlier this year. Their likeness of Hillary Clinton, who was portrayed stealing kisses, was pulled after it was labeled sexist. Released just before baseball season, the cards also featured Obama as a White Sox fan, John McCain as Ted Williams, and former candidates John Edwards as Archibald Wright “Moonlight” Graham and Rudy Giuliani as baseball-deflecting fan Jeffrey Maier.

The company has now added Sarah Palin to its deck, racing the Iditarod across the White House lawn, in a sled drawn by a team of pit bulls.