With regard to Sarah Palin and book banning, there’s been a lot of discussion about whether or not particular books were singled out for censorship by the then mayor of Wasilla, Alaska. 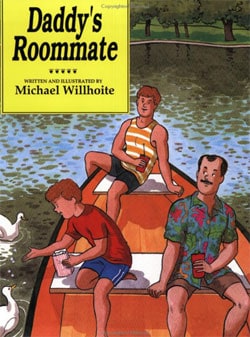 In a searing had some words for Palin after he heard the news: “I rather suspected one of my books might be the one she targeted. I can tell you right now, Ms. Palin is a very good mother and everything. But she is my mortal enemy. She is one of the enemies of the First Amendment and I can hardly [organize] my thoughts here, I am so offended by this. I don’t think Ms. Palin will care for me, but that is fine. I don’t really care for her, not at all. I think John McCain made a disastrous choice. Unfortunately she seems to be doing well in the polls but I would think the honeymoon period will be ending soon.”

A recent ABC investigation revealed that Palin had an interest in banning books and fired a librarian after the librarian told her that the library’s policies were based on national standards.

In 1993, Entertainment Weekly reviewed Daddy’s Roommate: “By any measure, these books are competent and humane — they can comfort a worried youngster or help any child understand that not all families in today’s world are built the same way. At the same time, they neither aim for nor achieve the transporting power of fiction to change a child’s inner life. No child is going to love them with a passion. So no adult need approach them with fear and loathing.”