A weekend of scrambling failed to rescue a financial giant: 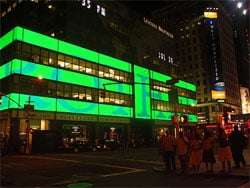 “The American financial system was shaken to its core on Sunday. Lehman Brothers Holdings Inc. said it would file for bankruptcy protection, and Merrill Lynch & Co. agreed to be sold to Bank of America Corp…Late Sunday night, Lehman said it intends to file for protection under Chapter 11 of the U.S. Bankruptcy Code with the United States Bankruptcy Court for the Southern District of New York…On Sunday night, Bank of America struck an all-stock deal to buy Merrill Lynch for $29 a share, or $50 billion. Though it steered clear of a bailout, the Federal Reserve is expected to take new steps to stabilize the broader financial system.”

With more to come…

“But even as the fates of Lehman and Merrill hung in the balance, another crisis loomed as the insurance giant American International Group appeared to teeter. Staggered by losses stemming from the credit crisis, A.I.G. sought a $40 billion lifeline from the Federal Reserve, without which the company may have only days to survive.”

Barack Obama today released a statement on the current financial crisis: “The situation with Lehman Brothers and other financial institutions is the latest in a wave of crises that are generating enormous uncertainty about the future of our financial markets. This turmoil is a major threat to our economy and its ability to create good-paying jobs and help working Americans pay their bills, save for their future, and make their mortgage payments. The challenges facing our financial system today are more evidence that too many folks in Washington and on Wall Street weren’t minding the store. For years, I have consistently called for modernizing the rules of the road to suit a 21st century market — rules that would protect American investors and consumers.”