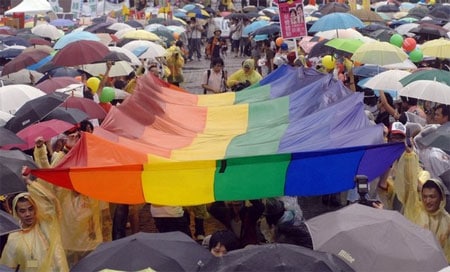 LGBT folks in Taipei, Taiwan, held their sixth gay parade over the weekend. 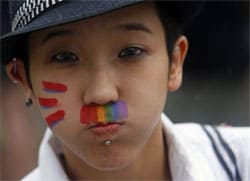 Australia’s The Age reports: “Braving showers on Saturday brought on by Typhoon Jangmi, an estimated 18,000 people – including representatives from gay rights groups in foreign countries – marched through the main streets of Taipei. The marchers displayed a 90-by-4.5-metre rainbow flag – the symbol of the gay rights movement – and waved placards to call for equal rights for gay people. Wang Ping, organiser of the march, which is in its ninth year, said the turn-out was bigger than 2007. ‘Last year there were about 15,000. Today there were about 18,000, and I saw some very young people taking part,’ she said. ‘This shows that more and more homosexuals are daring to stand out and be themselves. But we hope this ‘dare to be oneself’ can turn into participation in the gay rights movements,’ she said.”

Last year’s parade drew approximately 7,000 people according to reports. In 2006, Taipei’s mayor Ma Ying-jeou raised a rainbow flag over city hall for the first time, declaring, “Tolerance is a necessary virtue for any world-class city. Homosexuality is a natural phenomenon that cannot be suppressed away nor spread beyond its natural bounds. Gay rights are a part of human rights. We want Taipei to be a multifaceted city filled with love, peace and tolerance.”