David Foster Wallace, author of Infinite Jest and The Broom of the System, among others, took his own life over the weekend: 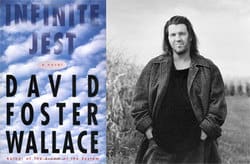 “David Foster Wallace, the novelist, essayist and humorist best known for his 1996 novel ‘Infinite Jest,’ was found dead Friday night at his home in Claremont, according to the Claremont Police Department. He was 46. Jackie Morales, a records clerk at the department, said Wallace’s wife called police at 9:30 p.m. Friday saying she had returned home to find that her husband had hanged himself. Wallace, who had taught creative writing at Pomona College since 2002, was on leave this semester. Times book editor David Ulin was in New York City for a National Book Critics Circle Board meeting Saturday. ‘What was a party is now a wake,’ Ulin said as the news of Wallace’s death circulated. ‘People were speechless and just blown away. He was one of the most influential and innovative writers of the last 20 years,’ Ulin said.”