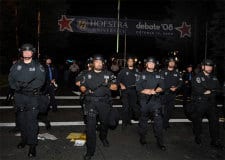 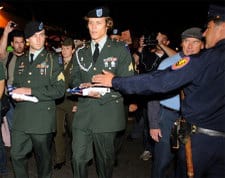 Be The Media reports that outside last night’s presidential debate there was “pandemonium” as members of Iraq Veterans Against the War attempted to enter the debate perimeter: “According to eyewitnesses, after the protesters tried to cross the street to enter the Hofstra campus, mounted police pushed the crowd back onto the sidewalk, causing at least three people to be trampled under police horses.”

Much more at Be The Media. (via huffington post)

Previous Post: « Obama Campaign’s Ad Response to McCain’s Claim: I am Not George Bush
Next Post: First Look: The Crew of the New Star Trek »