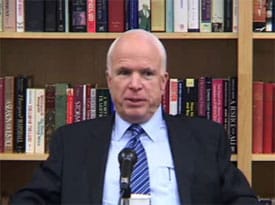 McCain did an interview yesterday with the Des Moines Register which was videotaped.

This can only be viewed as the posture of a candidate who’s both worried and angry about the turns his campaign have taken.

Frankly I’d be angry too if the economic policies I’d supported for the last quarter of a century had just been revealed to have tanked the country’s economy and had a running mate who spewed nonsense every time she opened her mouth.

Depending on which poll you look at, Obama leads McCain by an 8-14 point spread in Iowa.