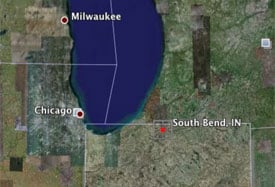 “Police said the man could provide few details of the attack because of the severity of his injuries, including broken bones, a smashed nasal cavity and deep cuts to his face. Police said the man, who listed his address as Leesburg, Ind., was in South Bend on Sunday to attend a party and watch a football game with other gay men. The man said he learned about the party through e-mail and couldn’t remember the home’s address. The man told police he left the party shortly after midnight and was attacked by a group of five or six men as he walked to his car. The man could provide few details about his attackers but said they called him a derogatory word and then proceeded to kick and beat him.”

According to the paper the man, who is 54-years-old, managed to drive himself to a friend’s house but passed out in his car due to his injuries. He was taken to a local hospital.