Former Secretary of State of staff under George W. Bush, Vietnam veteran, former National Security Advisor, and former Chairman of the Joint Chiefs of staff Colin Powell, who donated to John McCain’s campaign for president and twice met with Barack Obama to advise him, this morning endorsed Obama for president. 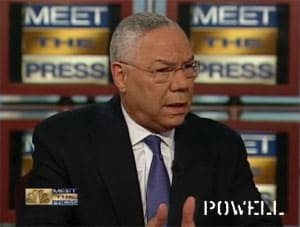 Powell, who said he has been troubled by the judgments John McCain has displayed during the last few weeks of this campaign (particularly his choice of Governor Sarah Palin as running mate and his lack of clarity on the economy) said his decisions were made in the last months and weeks. He praised Obama’s “steadiness, an intellectual curiosity, a depth of knowledge and an approach to looking at problems like this and picking a vice president that, I think, is ready to be president on day one. And also, in not just jumping in and changing every day, but showing intellectual vigor. I think that he has a, a definitive way of doing business that would serve us well.”

Said Powell: “I come to the conclusion that because of his ability to inspire, because of the inclusive nature of his campaign, because he is reaching out all across America, because of who he is and his rhetorical abilities–and we have to take that into account–as well as his substance–he has both style and substance–he has met the standard of being a successful president, being an exceptional president. I think he is a transformational figure. He is a new generation coming into the world–onto the world stage, onto the American stage, and for that reason I’ll be voting for Senator Barack Obama.”

In remarks after Meet the Press Powell slammed accusations of anti-Americanism and socialism from the GOP, particularly comments by Minnesota congresswoman Michelle Bachmann and her ugly appearance on Hardball Friday.

Watch the clip, read segments from the transcript, and listen to his post-interview remarks AFTER THE JUMP…

And here are the post-interview remarks, as well as the Michelle Bachmann appearance (via americablog):

I’ve written about Bachmann before here. In 2006, the Minnesota Senate Judiciary Committee rejected her constitutional amendment banning gay marriage by a party line vote of 5-4.

And you may remember that about a year before, she tried to play sneaky and circumvent the Senate committee process by forcing a vote on the floor while outside the state Capitol thousands of opponents of the ban rallied against it. She thought the move would pan out, but it didn’t, and she was later caught hiding behind some bushes to watch the rally from afar. Said Bachmann at the time: “This is a very serious matter because it’s our children that are the prize for this community. They are specifically targeting our children.”

She’s up for re-election, and she’s ahead.

On his decision to not endorse McCain:

“In the case of Mr. McCain, I found that he was a little unsure as to deal with the economic problems that we were having and almost every day there was a different approach to the problem. And that concerned me, sensing that he didn’t have a complete grasp of the economic problems that we had. And I was also concerned at the selection of Governor Palin. She’s a very distinguished woman, and she’s to be admired; but at the same time, now that we have had a chance to watch her for some seven weeks, I don’t believe she’s ready to be president of the United States, which is the job of the vice president. And so that raised some question in my mind as to the judgment that Senator McCain made.”

On what partly influenced his decision to endorse Obama:

“This Bill Ayers situation that’s been going on for weeks became something of a central point of the campaign. But Mr. McCain says that he’s a washed-out terrorist. Well, then, why do we keep talking about him? And why do we have these robocalls going on around the country trying to suggest that, because of this very, very limited relationship that Senator Obama has had with Mr. Ayers, somehow, Mr. Obama is tainted. What they’re trying to connect him to is some kind of terrorist feelings. And I think that’s inappropriate.”

He later added, on Ayers: “I think what [Ayers] did was despicable, and to continue to talk about it in 2001 is also despicable. But to suggest that because Mr. Barack Obama had some contacts of a very casual nature–they sat on a educational board–over time is somehow connected to his thinking or his actions, I think, is a, a terrible stretch. It’s demagoguery.”

On the Republican party’s shift to the right, accusations that Obama is a Muslim, and religious bigotry:

“And the party has moved even further to the right, and Governor Palin has indicated a further rightward shift. I would have difficulty with two more conservative appointments to the Supreme Court, but that’s what we’d be looking at in a McCain administration. I’m also troubled by, not what Senator McCain says, but what members of the party say. And it is permitted to be said such things as, “Well, you know that Mr. Obama is a Muslim.” Well, the correct answer is, he is not a Muslim, he’s a Christian. He’s always been a Christian. But the really right answer is, what if he is? Is there something wrong with being a Muslim in this country? The answer’s no, that’s not America.”

On the accusations he anticipates that he chose to endorse Obama because of his race:

“If I had only had that in mind, I could have done this six, eight, 10 months ago. I really have been going back and forth between somebody I have the highest respect and regard for, John McCain, and somebody I was getting to know, Barack Obama. And it was only in the last couple of months that I settled on this. And I can’t deny that it will be a historic event for an African-American to become president. And should that happen, all Americans should be proud–not just African-Americans, but all Americans–that we have reached this point in our national history where such a thing could happen. It will also not only electrify our country, I think it’ll electrify the world.”