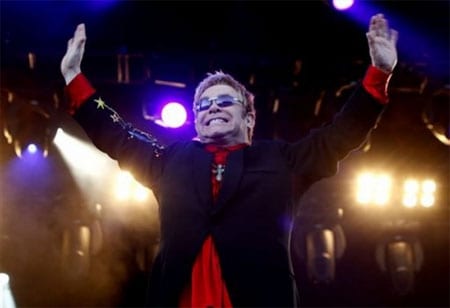 Elton John talks to GQ about Broadway musicals, his musical career, his alleged feud with singer Lily Allen (That was just such nonsense.”), collaborating with the Killers, and the Ben & Jerry’s ice cream flavor, Goodbye Yellow Brickle Road, which benefited his AIDS foundation on the occasion of his first-ever concert (above) in Vermont.

Said Elton of the cool collaboration: “We were trying to find someone who came from Vermont that was famous, and Ben and Jerry came top of the list. They were so helpful and so great, and it was a delicious ice cream. I wanted to call it Fudge Packer.…”