Father Geoff Farrow, the Fresno, California priest who earlier this month received a standing ovation from his congregation after speaking out against California’s Proposition 8 in a sermon to his parish and then followed it up by coming out of the closet to news media later, has been suspended by the Fresno Bishop. It was not unexpected. 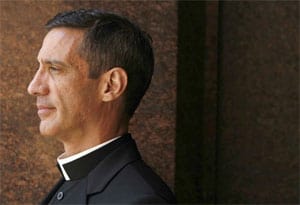 Farrow writes on his personal blog: “In all candor, I had anticipated that response which is why, I had removed my personal property from the parish house and offices. I bear no personal antimosity to the bishop for his decision.”

Said Farrow in his sermon: “In directing the faithful to vote ‘yes’ on Proposition 8 the California bishops are not merely entering the political arena, they are ignoring the advances and insights of neurology, psychology, and the very statements made by the church itself that homosexuality is innate…I know that these words of truth will cost me dearly. But to withhold them would be far more costly and I would become accomplice to a moral evil that strips gay and lesbian people of their civil rights but of their human dignity as well.”

Fresno Bishop John T. Steinbock removed Farrow on Thursday, the L.A. Times reports in a lengthy article: “‘Your statement contradicted the teaching of the Catholic Church and has brought scandal to your parish community as well as the whole Church,’ Steinbock wrote in a disciplinary letter that also admonished Farrow against ‘using the Internet as a means of continuing your conflict with the Church’s teaching.’ The priest also was stripped of his salary and benefits, and ordered to stay away from all church communities he had served.”

Farrow is unrepentant about his actions: “I felt the need to speak, not for myself but, on behalf of those who have no one to speak for them in this matter in our Church. Personally, my life has been rather difficult since I made this statement as I knew it would be. I have no regrets since, it was my hope that this statement would lead to greater discussion of the treatment of gay and lesbian people in and by the Church. Also, it is my earnest hope that in some small way, this helps to preserve the civil rights of gay and lesbian persons which are currently under attack by the proponants of Propostion 8. “