ET‘s Thea Andrews talked to George Takei about William Shatner’s extended rant attacking former co-star George Takei. Takei tells her that Shatner, in fact, was invited but never responded. He also challenges Shatner to join them in the campaign against Proposition 8. 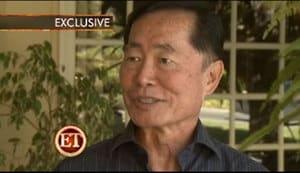 Says Takei: “It is absolutely baffling to us because in fact we did invite Bill and we didn’t hear from him but it isn’t surprising because it’s true to his history…He’s never responded to an invitation. For instance, every time there was something happy to celebrate amongst us, like getting sa star on Hollywood Blvd – he never showed up, even for [Star Trek creator] Gene Roddenberry. In fact, the most surprising thing is he didn’t even show up for Gene Roddenberry’s funeral.

Takei also responds to statements by Shatner that he waited to come out till he was 70:

Watch it, AFTER THE JUMP (and I apologize that it’s an ‘autoplay’ clip – if anybody comes across a YouTube clip that’s not autoplay, please let me know and I’ll substitute it)…