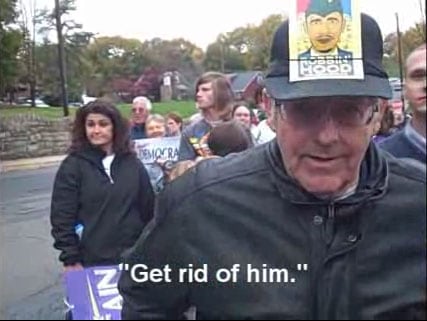 Check out this clip of McCain-Palin supporters in Pottsville, Pennsylvania. It’s likely scarier than anything you’ll see this Halloween, AFTER THE JUMP…

Obama effigy found hanging at University of Kentucky: “It is with profound sadness that I must report to you that an effigy of Obama was found hanging from a tree on campus this morning. It was taken down immediately, but the damage and hurt will linger for a long time. I literally feel sick to my stomach. There will be a statement from the President shortly, and we are also considering other expressions of outrage. In the meantime, please alert your staff and be prepared to counsel students, staff, and faculty of color, in particular, as needed.”

Deer head found outside Obama office in Colorado Springs: “The Humane Society says the buck’s antlers had been cut off to make the head resemble a donkey, the symbol of the Democratic Party. Right now, police have no suspects.”

Get off my lawn: Ohio man shoots teen who tried to steal his McCain yard sign.