Tonight’s half-hour Obama TV spot airs at 8pm EST. The spot was rejected by CNN. Also, “Hibberd reports that Fox News was not approached by the Obama campaign. The ad is slated to air on MSNBC, making it the only cable news outlet to run the ad. NBC, Fox, CBS, and Univision will also broadcast the ad. Despite reports to the contrary, a Fox Broadcasting executive told Politico’s Ben Smith that the network did not move the World Series for the campaign ad, and that the first pitch was never slated for earlier than 8:30 PM. Rather, Fox made a “business decision” to air the ad in lieu of the pre-game special.” Here’s a preview of what you’ll see. 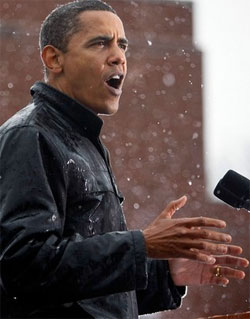 The headline says it all: Obama Addresses Crowd in Downpour; McCain Cancels.

Same-sex marriages begin next month in Connecticut: “Attorneys involved in the gay marriage case said Tuesday that couples can begin picking up marriage license applications sometime on or after Nov. 10. A judge at the New Haven Superior Court, where the case began in 2004, still must decide the precise date.”

Barney Frank is John McCain’s new target on the campaign trail. Frank: “I’m flattered by this. But I don’t think I’m the single most important member of the House after Nancy Pelosi. There are also a lot of straight white men who are committee chairmen.” 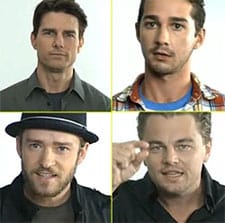 It really is a thin line, between love and hate.

USA Network de-gays cheerleader movie Bring it On: “Not only did they remove the coming-out scene where he says he speaks fag “fluently,” but also the bit at the end where he meets another cute guy backstage at the nationals. However, USA saw fit to leave the homophobic slurs (Eliza Dushku being called a dyke, one straight jock calling another a fag) intact.” 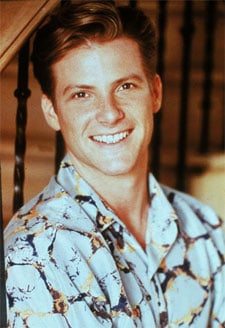 What will they think of next: Melrose Place to return.

Gay bar to reopen in Lincolnshire, UK: “Lincoln’s only gay bar is to reopen this week – following the disappearance of the previous landlords. Christopher’s bar in Newland closed its doors in mysterious circumstances when the two licensees left earlier this month. But a new manager has now been found. Andrew Dickinson will open the bar at 8pm on Friday with a Hallowe’en event.”

SLDN hits out at military’s continued use of ‘stop-loss’ policy: “The continued use of stop loss illustrates how the discharge of over 12,500 qualified service members under ‘Don’t Ask, Don’t Tell’ has greatly strained military readiness at a time when our armed forces are already stretched far too thin around the globe. ‘Don’t Ask, Don’t Tell’ undermines the military’s ability to attract qualified personnel of all backgrounds in order to keep pace with increasing deployment needs.”

Cast announced for West Side Story Broadway revival: “Heading the cast will be Matt Cavenaugh (A Catered Affair, Grey Gardens) as Tony, Karen Olivo (In the Heights) as Anita, Cody Green (Movin’ Out) as Riff and George Akram (“Stuck on You”) as Bernardo. Twenty-one-year-old Argentinean actress Josefina Scaglione, who created the role of Amber Von Tussle in the Argentinean production of Hairspray, will make her Broadway debut as Maria.”