Sarah Palin may not be talking to reporters, but her future son-in-law is. 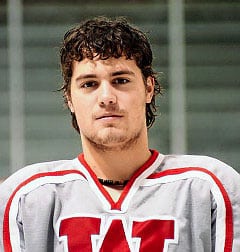 In an interview with the AP, Johnston speaks up on a number of topics,including being told to keep his mouth shut: “They’re not telling me anything right now. It’s pretty chill.”

On being forced into a shotgun wedding: “None of that’s true. We both love each other. We both want to marry each other. And that’s what we are going to do…We were planning on getting married a long time ago with or without the kid. That was the plan from the start…We’re up for it. I’m excited to have my first kid. It’s going to be a lot of hard work but we can handle it.”

On his hobbies: “Johnston is an avid hunter. He’s dark haired, tall and muscular, sports a bit of stubble and drives a red Chevy Silverado truck. He’d be the perfect cover for Field & Stream. He’s bagged bears, sheep, elk, and caribou. Some of the antlers are scattered about his yard. Last July on a caribou hunt he lost a ‘promise’ ring that Palin had given him. He said he decided to tattoo her name on the finger and not bother with more rings because he’d just lose them anyway.”

And on Barack Obama: “I don’t know anything about him. He seems like a good guy. I like him.”

Previous Post: « Towleroad Guide to the Tube #373
Next Post: Sarah Palin Slams Abuse of Power After Being Found Guilty of It »