London chaplain Peter Mullen has written a column in The Northern Echo clarifying remarks he made recently that gays should be tattooed with sodomy warnings. He calls it an apology. 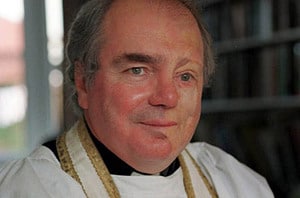 In a column entitled “Why I was Wrong”, Mullen says: “To wit: I was not criticising individual homosexuals. I have never criticised them. I number many homosexual men and women among my dearest friends. I voted for the Homosexual Reform Act of 1967; and I would vote for it again today. This Act specified the decriminalisation of homosexual acts ‘between consenting adults in private.’ ‘Between’ means two. ‘Adults’ meant 21. ‘Private’ means in the bedroom – and neither Hampstead Heath nor public lavatories. What I do oppose – on the authority of the Christian faith – is the corrupting influence of the promotional parades of homosexuality by such as Gay Pride demonstrations. And that is what I was satirising.”

He adds: “One might say that what was once a mortal sin is now only a lifestyle choice. And the love that once dare not speak its name now shrieks at us in high camp down every high street. This situation is what some homosexualist campaigners constantly claim under their doctrine of ‘rights’. It is the reason also that they are so annoyed with me – because I repudiate their ‘rights’ argument – which is in any case not Christian but secular.”

Why I was wrong [the northern echo]