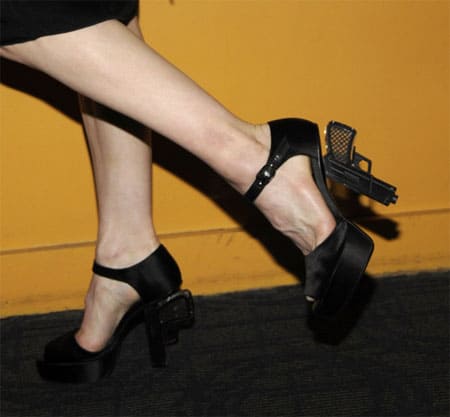 Madonna is under fire for attending last night’s New York screening of her film Filth & Wisdom in a pair of Chanel stilettos fashioned with mini-pistols. 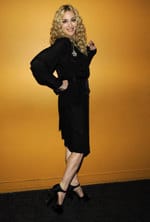 Metro reports: “Instead of a normal heel, the Chanel shoes have a piece of metal in the shape of a gun. The ‘Miami Vice’ shoe, made from plexiglass, is about to be sold across the world, and is the brainchild of designer Karl Lagerfeld. But Madonna’s fashion faux pas has been slammed by a UK victims’ group. Lyn Costello, from Mothers Against Murder And Aggression (MAMAA), said: ‘I am horrified that Madonna can see these shoes as fashion. As a mother herself I would have thought that she would have paused for a second and thought about all the young people here and in her own country that have died because of gun crime. We need the whole of society to take responsibility and action in stopping the glamourisation of weapons. Celebrities have a massive part to play and an icon like Madonna should have more sense. It’s uncaring. Surely she reads the news and realises that young people are dying every day.’ Ms Costello even invited the pop star to contact MAMAA so she could see the devastation caused by gun crime.”