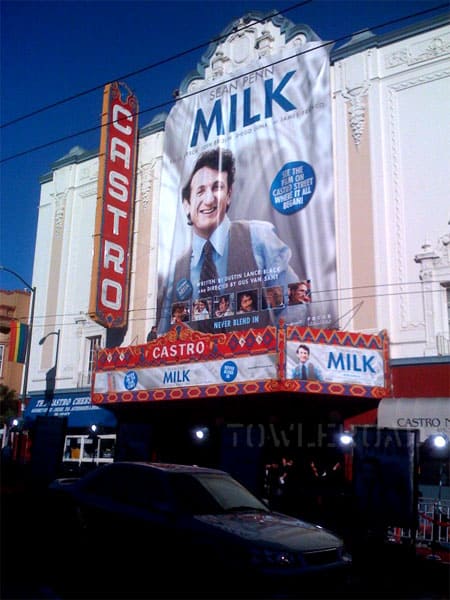 Towleroad has obtained the text of a letter Focus Features CEO James Schamus sent to the editor of The Hollywood Reporter in response to an article published today which appears to second-guess the marketing minds of the Milk filmmakers. The publication of the article*, timed, coincidentally or not, on the day that the politically-themed Milk is set to premiere, has Focus calling foul.

Above, the historic Castro Theatre, where Milk premieres tonight, as it looked this afternoon, sent to us by a reader.

*** TEXT OF LETTER FROM JAMES SCHAMUS TO HOLLYWOOD REPORTER***

Slow news day, eh? As the CEO of Focus Features, I read with interest your October 28 front page article “Politics? Focus won’t ‘Milk’ it,” about our marketing of director Gus Van Sant’s film about Harvey Milk, the first openly gay man elected to major public office in America. The author’s thesis is simple: because the film was not, like “Brokeback Mountain,” screened at festivals, Focus is somehow hiding the film and is thus avoiding openly presenting its political content. That’s a pretty serious charge, especially made by a reporter who did not call us to get his facts, so to speak, straight.

First of all, to the charge of “hiding” the film (for which, given its post-production schedule, we have only had finished prints at hand for a couple of weeks – a fact conveniently missed by your reporter), I can only say that I happen to be writing this while on my way to the airport for a flight to San Francisco, where we shall world-premiere the film tonight at the Castro Theatre, across the street from the storefront where Harvey began his political career. We determined early on that the only appropriate place for the world premiere of “Milk” was San Francisco. The event is a benefit for four LGBT youth groups; our benefit committee is chaired by San Francisco Mayor Gavin Newsom, and includes every major LGBT leader in Northern California and virtually every major statewide elected official, including Senator Barbara Boxer, Assemblyman Mark Leno, and Treasurer José Cisneros. The premiere is timed to the final week before a crucial election, one which includes an anti-gay state proposition much like the one Harvey Milk vanquished 30 years ago. The after-screening gathering will be held at San Francisco’s City Hall, and today has been proclaimed “Focus Features Day” by the Mayor – who clearly didn’t get The Hollywood Reporter in time to understand our underhanded, apolitical approach to marketing the film.

Immediately on the heels of the premiere, a series of word-of-mouth screenings will be held over the next few weeks in every major city across the country. We will also be holding premieres of “Milk” in New York, Los Angeles, and Portland.

But if a journalist is to write about our marketing campaign, might he consider actually talking about…our marketing campaign? The trailer for “Milk,” for example (see it for yourself at www.milkthemovie.com) is, not just in my opinion, probably the most inspiring piece of movie marketing about genuine (as well as out) politics ever created. It has been the most explosively received and appreciated trailer in the history of our company, posted on hundreds of sites, and played and playing in theaters nationwide in front of more than a dozen movies.

Following the debut of that trailer way back on September 12, our marketing campaign mobilized an early online media push timed to all four presidential race debates – the mornings after, we had specially commissioned “Milk” ad buys on the political pages of the websites of The New York Times, The Los Angeles Times, National Public Radio, The Huffington Post, and many more. Our banner ads and 60-second spots were all about the film and what it and Harvey represent. Speaking of which, beyond the trailer, check out the rest of our website; it’s already filled with scores of stories from people across the country, linking their own lives to Harvey Milk’s transformational politics.

I expect that more thorough journalism on our “Milk” campaign will be published in THR soon.

For all of Towleroad’s coverage on Harvey Milk the gay rights hero, as well as the film, click HERE.

*Note – the article appeared to be published online under a separate headline than the print edition.