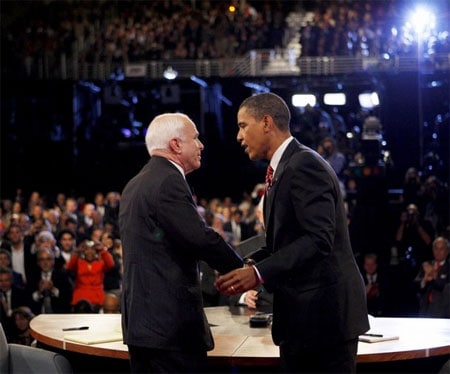 Barack Obama and John McCain faced off in the final presidential debate at Hofstra University. Obama and McCain answered questions on the economy, health care, and energy, as well as negative campaigning and personal attacks. I may have more clips up later, but here is the immediate polling from CNN and CBS, which shows gains for Obama.

Of 23 undecideds in FOX’s focus group, four people switched their vote following the debate. All four moved toward Obama. Said Frank Luntz: “This is a good night for Barack Obama.”

Obama Favorables: 63 before, 66 after
Obama Unfavorables: 35 before, 33 after

63% think Obama will raise their taxes, while 48% think McCain will.

Salon: McCain loses again. “His worst move was ridiculing Obama’s support for abortion rights measures that protect ‘the health of the mother.’ He sneered out the words, “health of the mother,” and actually framed them in air quotes. His standing with women was already plummeting; watch it drop more from here.”

CNN’s David Gergen – …like watching an exercise in anger management: “It then hit the personal animosity of the advertising and then I thought McCain swerved off track…He got overemotional about it. He looked angry. And it was almost an exercise in anger management up there for him to contain himself. And Obama maintained his cool, and I thought that changed the tone of the debate and Obama won the last half hour. I thought Obama really did well on education, abortion and health care.”

THE EYE ROLL: At Colombian leaders being targeted for assassination.

EVEN FOX NEWS DISPUTES IT: Obama battles back against tax increase accusations.

Watch the FULL DEBATE, AFTER THE JUMP…