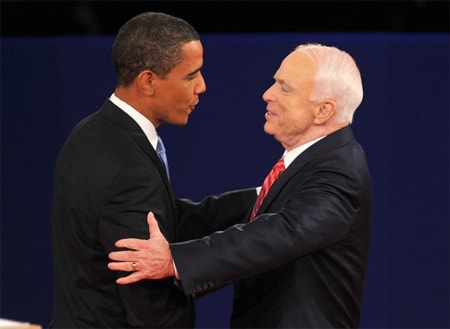 CNN’s Wolf Blitzer “It’s apparent that Senator McCain has some disdain, I think it’s fair to say, for Senator Obama…”

L.A. Times: “Too often, the two men yammered over their Senate voting records — symptomatic, as we noted below, of a congressional mentality that doesn’t translate well in a presidential debate. More vision — something Bill Clinton and Ronald Reagan would have spun out effortlessly — would have better served Obama and McCain’s purposes.”

Andrew Sullivan: “This was, I think, a mauling: a devastating and possibly electorally fatal debate for McCain.”

Taegan Goddard – Political Wire – “Tonight’s debate wasn’t even close. Sen. Barack Obama ran away with it — particularly when speaking about the economy and health care. Talking about his mother’s death from cancer was very powerful. On nearly every issue, Obama was more substantive, showed more compassion and was more presidential. In contrast, Sen. John McCain was extremely erratic…”

Robert Kaiser, Washington Post: “I did not think this was McCain at his best. He often seemed very self-conscious to me. His breathless voice tonight sometimes seemed strained and unnatural. His determination, evident in the first debate, to avoid his catch-phrase “my friends” disappeared tonight. He repeated himself quite often. But he ended very well. Obama seemed to project the same steady, cool persona we saw the first time out, and which, the polls say, won the debate for him then.”

One of Obama’s best moments came in a follow-up to John McCain’s accusation that he would announce and launch an attack against Pakistan.

Said Obama: “Look, I — I want to be very clear about what I said. Nobody called for the invasion of Pakistan. Sen. McCain continues to repeat this. What I said was the same thing that the audience here today heard me say, which is, if Pakistan is unable or unwilling to hunt down bin Laden and take him out, then we should. Now, that I think has to be our policy, because they are threatening to kill more Americans. Now, Sen. McCain suggests that somehow, you know, I’m green behind the ears and, you know, I’m just spouting off, and he’s somber and responsible…Sen. McCain, this is the guy who sang, ‘Bomb, bomb, bomb Iran,’ who called for the annihilation of North Korea. That I don’t think is an example of ‘speaking softly.’ This is the person who, after we had — we hadn’t even finished Afghanistan, where he said, ‘Next up, Baghdad.’ So I agree that we have to speak responsibly and we have to act responsibly. And the reason Pakistan — the popular opinion of America had diminished in Pakistan was because we were supporting a dictator, Musharraf, had given him $10 billion over seven years, and he had suspended civil liberties. We were not promoting democracy. This is the kind of policies that ultimately end up undermining our ability to fight the war on terrorism, and it will change when I’m president.”

Below
Obama responds to McCain on Fannie Mae and Freddie Mac and the bailout.
Obama: “Some things I don’t understand”

Previous Post: « McCain Refers to Obama as ‘That One’
Next Post: Barack Obama and John McCain Comic Books Hit the Stands »