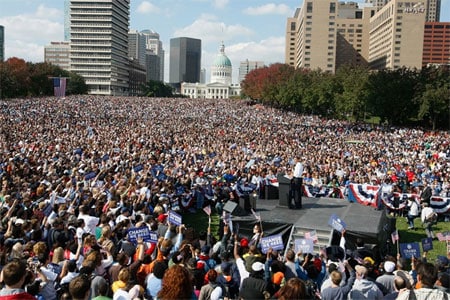 The official police estimate for Obama’s rally in St. Louis on Saturday was 100,000, the largest crowd he has drawn thus far:

“The massive gathering—followed by an evening event in Kansas City that his campaign said drew at least 75,000—created a powerful image of strength in a bellwether state that has gone Republican in the past two presidential elections. ‘All I can say is, wow,’ Obama said as he took the stage here, his home state within view across the Mississippi River.”

On Sunday, the Obama campaign announced that it raised more than $150 million in September: “His campaign has now raised more than $600 million, almost equaling what all the candidates from both major parties collected in private donations in 2004.”

A day after Colin Powell’s endorsement, in an interview on Today, the Democratic candidate said that Powell would serve as an adviser in an Obama administration: “Whether he wants to take a formal role, whether that’s a good fit for him, is something we’d have to discuss.”

Obama responded to the news of Powell’s endorsement at a rally in Fayetteville, North Carolina on Sunday. Watch the clip, AFTER THE JUMP…