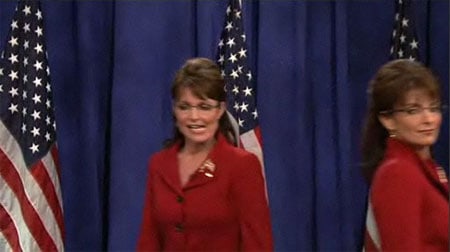 While there are differing opinions about the success or failure of Sarah Palin’s appearance on Saturday Night Live, it’s pretty apparent that ‘Caribou Barbie,’ as Palin acknowledged her nickname to be, failed to show she was above that attribution.

The real winner in this duel was Tina Fey, and NBC, which scored its highest numbers in 14 years. Robert Kubey, in the HuffPost, called it a huge GOP disaster. While I wouldn’t go that far, I don’t think the appearance scored her any points.

Watch the ‘Weekend Update’ segment, AFTER THE JUMP…