Survivor reject and View co-host Elisabeth Hasselbeck finally found a place where she could “talk for a full five minutes without getting interrupted.” She introduced Sarah Palin at a Tampa rally over the weekend. Said Hasselbeck: “I have a hard time not being sassy. I can’t help it.” 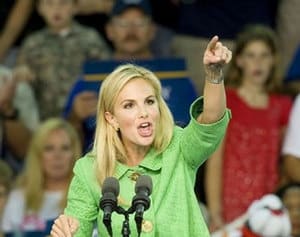 Hasselbeck and Palin spent much of their time slamming media coverage of Palin’s $150,000 in RNC wardrobe expenses. Said Hasselbeck: “Now, with everything going on in the world, seems a bit odd. But let me tell you, this is deliberately sexist.”

The HuffPost notes: “In a moment of unintended irony, an audience member cat-called Hasselbeck with a whistle in the seconds after she made the comment.”

Aides to McCain criticized Palin over the weekend, accusing her of “going rogue” and thinking more “for her own future” than that of the McCain campaign. Said an advisor to CNN: “She does not have any relationships of trust with any of us, her family or anyone else. Also she is playing for her own future and sees herself as the next leader of the party. Remember: divas trust only unto themselves as they see themselves as the beginning and end of all wisdom.”

Watch the Hasselbeck and Palin clips, AFTER THE JUMP…

Previous Post: « Amazon Had Obama Mask on Sale as ‘Terrorist Costume’
Next Post: Joe Biden to Anchor on ‘Marxist’ Question: ‘Are You Joking?’ »