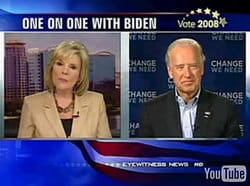 ANCHOR: How is Senator Obama not being a Marxist if he intends to spread the wealth around?

BIDEN: Are you joking? Is this a joke? Or is that a real question?

ANCHOR: No. That’s a question.

BIDEN: He is not spreading the wealth around. He is talking about giving the middle class an opportunity to get back the tax breaks they used to have.

The Obama campaign cancelled a scheduled WFTV interview with Jill Biden as a result.