Speaking at ‘Homophobia – Football’s Final Taboo’, a forum on the sport, ex-central defender for Chelsea and Celtic Paull Elliott told the gathering that he knows of at least 12 top football players who are gay but are reluctant to come out “because they fear negative reactions.” 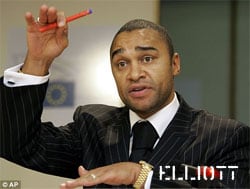 Additionally, “BBC commentator Bob Ballard, who chaired the event, criticised the FA and Chelsea for allowing the appointment of Phil Scolari as Chelsea manager. Brazilian Scolari had said that he would never have a gay player on his team, which is against the FA’s equal treatment rules. Accusing the FA of double standards, Ballard said that if Scolari had said he would kick out black or Jewish players he would have never been appointed at Chelsea.”

Gay activist Peter Tatchell also participated in the forum. Said Tatchell: “The Football Association has great equality policies on paper but it often fails to put them into practice. It’s time to turn the FA’s opposition to anti-gay prejudice into action and give homophobia the boot.”