A Toronto-area lesbian couple were the targets of an unprovoked attack and assault by a man while picking their kids up at school on Friday: 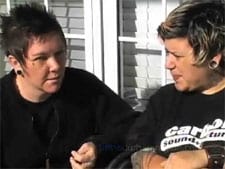 “Ms. Dimitriou, 30, and her lesbian partner Jane Currie, 37, said Friday they still can’t believe what happened. ‘He clocked me right in the face, like right in the side of my face, and I hit my truck and I couldn’t see anything, like I blacked out,’ Ms. Dimitriou said. ‘I was awake but I could hear everything but I just couldn’t see anything. Then I think he clocked me again right in the top of my head.’ Classes had just let out Monday at Gordon B. Attersley elementary school on Attersley Drive, according to the couple. Ms. Dimitriou said she was helping her son put his backpack into the car when another student’s father came toward her and began yelling. He referred to her and Ms. Currie as men, she said, as she recounted what happened. Ms. Dimitriou said the man swore at her, called her a slang word for lesbian in an aggressive and derogatory way, then ‘out of nowhere’ spit in her face and punched her.”

When Dimitriou’s partner Currie ran over to help, she too was assaulted, requiring four stitches. This all happened in front of the couple’s children, the attacker’s children, and other children at a school.