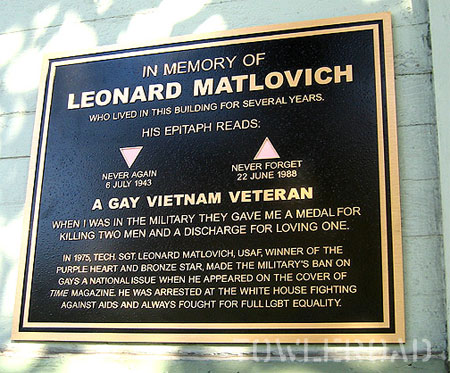 Back in June I reported that the residence of Leonard Matlovich, a Vietnam war vet and gay rights pioneer who took up residence in San Francisco’s Castro District in the late 70’s and appeared on the cover of TIME magazine in September 1975 under the headline “I am a Homosexual”, was to be recognized with a plaque thanks to the work of friends, including frequent Towleroad commenter Michael Bedwell. 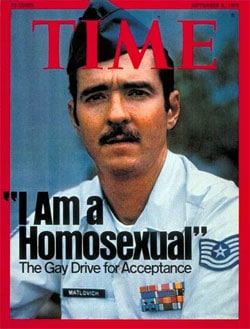 Said Bedwell to the BAR at the time, “I wanted to memorialize him both to pay respect to him and to make newer generations aware of him. Mainstream society has countless examples of these which mark the people who came before, that inspire people, and reinforce people’s identity themselves.”

The TIME story concerned Matlovich’s fight against the ban on gays in the military. According to the BAR: “He had told his commanding officers he was a homosexual but wanted to remain in the service. The Air Force kicked him out, and Matlovich sued the secretary of the Air Force. Matlovich settled out of court and received $160,000. The lawsuit did prompt the military after 1981 to switch from giving gay service members dishonorable discharges to honorable discharges.”

Matlovich’s headstone, in the Congressional Cemetery in Washington, DC, is well-known. It reads: “When I was in the military, they gave me a medal for killing two men and a discharge for loving one.”

The plaque had a dedication ceremony last Saturday at San Francisco’s LGBT Community Center. It is now up at the corner of 18th and Castro. Matlovich died of AIDS in 1988. He was 44.

In related news, over 100 of the U.S. military’s retired generals and admirals called for the repeal of “Don’t Ask, Don’t Tell” in a document released Monday. 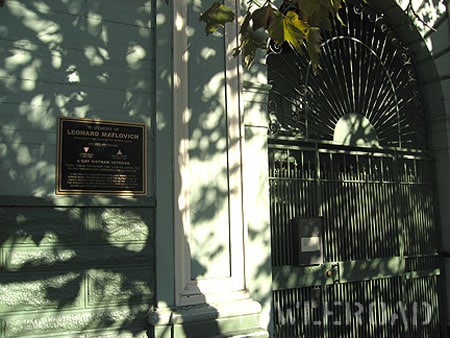