The crooks are starting to fall.

“On the day the longest-serving Republican in Senate history turned 85, he was ousted by Alaska voters troubled by his conviction on federal felony charges and eager for a new direction in Washington, where Stevens served since Lyndon B. Johnson was president. Alaska voters ‘wanted to see change,’ said Democrat Mark Begich, who claimed a narrow victory Tuesday after a tally of remaining ballots showed him holding a 3,724-vote edge. ‘Alaska has been in the midst of a generational shift – you could see it,’ said Begich, the Anchorage mayor. Democrats now hold 58 Senate seats, when two independents who align with Democrats are included, with undecided races in Minnesota and Georgia.”

Democrats are getting closer to a filibuter-proof 60-seat majority.

In other news, Vice PResident Dick Cheney and former Attorney General Alberto Gonzales have been indicted in Texas on state charges: 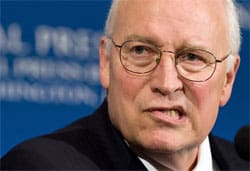 “Cheney’s indictment on a charge of engaging in an organized criminal activity criticizes the vice president’s investment in the Vanguard Group, which holds interests in the private prison companies running the federal detention centers. It accuses Cheney of a conflict of interest and “at least misdemeanor assaults” on detainees because of his link to the prison companies. Megan Mitchell, a spokeswoman for Cheney, declined to comment on Tuesday, saying that the vice president had not yet received a copy of the indictment. The indictment accuses Gonzales of using his position while in office to stop an investigation in 2006 into abuses at one of the privately-run prisons.”

News clips, AFTER THE JUMP…