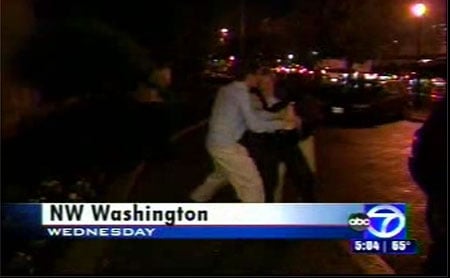 Two gay men celebrating Obama’s win and carrying a rainbow flag following celebrations on election night were attacked in Washington D.C. by a disgruntled Republican coming out of the hotel where the GOP was commiserating over its loss:

“As two men celebrating the Democratic victory passed the hotel, someone darted at them and attacked them, according to the men and witnesses. ‘He seemed to be a little intoxicated and maybe he was a little upset because his candidate didn’t win,’ said Zack Pesavento, one of the two men who said they were attacked and filed a police complaint…Witnesses say it started when one man lunged at the other two and grabbed their rainbow flag, the symbol of gay rights. ‘When I tried to grab it away from him, he started hitting me, trying to attack me,’ said Steve Kensinger, the other of two men who reported the attack. ‘He was very aggressive and very threatening and it definitely scared me.’ Pesavento says his friend got the worst of it. ‘It was really violent and it it was really frightening and it seemed like he was really trying to hurt him,’ Pesavento said.”

The attacker, who claims he did not know what the rainbow flag symbolizes, has been charged with assault.

ABC cameras caught the end of the altercation. 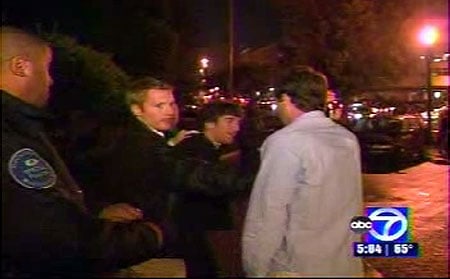