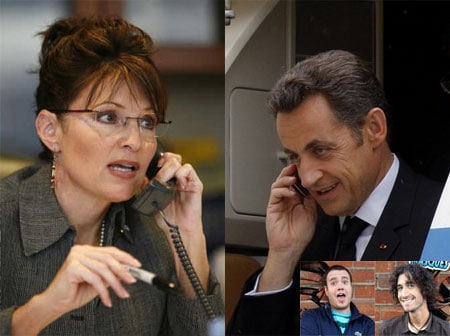 Montreal comedy duo Marc-Antoine Audette and Sebastien Trudel prank-called Governor Sarah Palin yesterday pretending to be French President Nicolas Sarkozy. Not only did Palin’s aide hand off the call but Palin stayed on the phone conversing for six minutes before the duo revealed to her that she had been fooled.

When fake Sarkozy told her he hoped she would be president one day, Palin replied: “Haha, maybe in eight years.”

Palin also responded to a compliment on heer hunting abilities: “Oh, very good, we should go hunting together. I think we could have a lot of fun together as we’re getting work done. We could kill two birds with one stone that way.”

While the fake Sarkozy asks her if she’s married to Joe the Plumber and tells her that “We have the equivalent of Joe the Plumber in France. It’s called Marcel, the guy with bread under his armpit,” Palin does not pick up on the joke.

Obama spokesman Robert Gibbs remarked on the call, saying, “I’m glad we check out our calls before we hand the phone to Barack Obama.”

Listen to the call, AFTER THE JUMP…

Previous Post: « Urgent: Help Get Out the Vote Against Prop 8 in California
Next Post: Real-Life Witch Denies Halloween Candy to Kids of Obama Supporters »