Nagel refused to give out candy to trick-or-treaters who were children of Obama supporters.

As one YouTube commenter so aptly puts it, “Thank you SHIRLEY NAGEL for sharing your bitter ignorance with the world. You are the PERFECT reminder of the change we are voting for.”

UPDATE: As one of our astute commenters points out, Nagel, who was a delegate from Michigan at the Republican National Convention this year, was interviewed by Triumph the Comic Insult Dog after a few glasses of Cabernet. 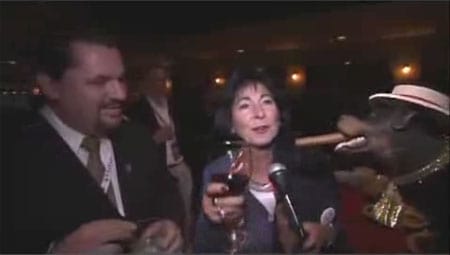 And here’s Triumph the Insult Comic Dog at the Republican National Convention. Interview with Shirley the drunk comes at 4:16.