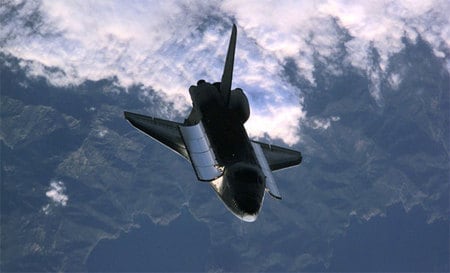 So you may remember that last week a tool bag was lost (below, right) by astronaut Heidemarie Stefanyshyn-Piper during a spacewalk on the International Space Station, and it drifted off into space to begin its own orbit of the Earth.

Perhaps the strangest twist to the story since then is that the tool bag is being tracked by skywatchers on earth and has now been filmed by an amateur Canadian astronomer from his backyard as it zipped across the night sky.

“Amateur astronomer Kevin Fetter filmed the bag after locating it on Saturday and posted the video to YouTube. ‘The U.S. military tracks this stuff so because they released the information I could actually point exactly where it was going to pass,’ Fetter told CTV Newsnet on Tuesday. ‘I was surprised it was as bright as it was, I wasn’t sure how bright it would actually be when it passed.’ Fetter said anyone can spot the bag with a pair of binoculars if they know where to look. He said the bag will keep orbiting the earth until it’s orbit decays and it burns up upon re-entry to earth.”

You can watch it, on a repeated loop, AFTER THE JUMP…

Incidentally, these other shots are from a gorgeous portfolio on The Big Picture celebrating that 10th birthday of the ISS. 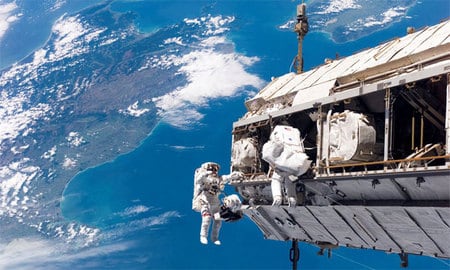