Los Angeles Film Festival director Richard Raddon, a “devout” Mormon, has resigned from his position following revelations that he donated $1,500 to the campaign to write discrimination into California’s constitution, Variety reports: 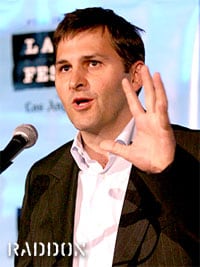 “After bloggers published his name, culled from public records of donors, Raddon tendered his first resignation on Nov. 13 to Film Independent’s board of directors. It was not accepted, and Film Independent released a statement saying, ‘Our organization does not police the personal, religious or political choices of any employee, member or filmmaker.’ Yet Internet message boards and other published reports kept the issue at the center of a growing protest movement that has targeted ‘Yes on 8’ donors including the Mormon Church and Cinemark Theaters, whose CEO was a contributor. On Monday, Raddon submitted a second resignation. Those close to the org described Monday’s conference call with the board of directors as emotional. While Raddon’s contribution had caused some internal angst, he was well liked within the org. On Tuesday, Film Independent issued a statement saying, ‘With great reluctance, Film Independent has accepted Richard Raddon’s resignation. Rich’s service to the independent film community and to Film Independent has been nothing less than extraordinary. He has always shown complete commitment to our core principles of equality and diversity during his long tenure.'”

A replacement for this bigot has not been named.

Previous Post: « Milk Inspires Roger Ebert to Come Out as Straight
Next Post: Now You Can Finger Karl Lagerfeld »