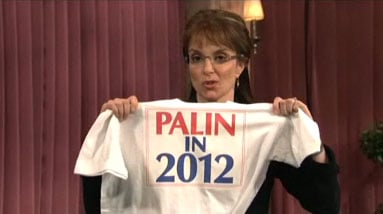 I have to give it to John McCain for an SNL performance in which he came across as funny and human, and even managed to somehow humanize ice princess Cindy McCain. I was a bit astonished at McCain’s complicity in the skit’s basic admission that Sarah Palin has “gone rogue.”

Watch the SNL skit, AFTER THE JUMP… 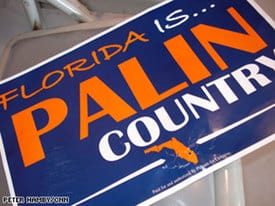 I don’t remember ever seeing a VP candidate detaching themselves so clearly from a presidential campaign before election day has arrived. At a Palin rally in Polk County, Florida on Saturday, McCain’s name WAS NOWHERE TO BE FOUND:

“Looking around the Fantasy of Flight aircraft hangar where the rally took place, one could see all the usual reminders that it was a pro-McCain event. There were two large “Country First” banners hung on the walls along with four enormous American flags meant to conjure the campaign’s underlying patriotic theme. Many of the men and women in the audience wore McCain hats and t-shirts. But on closer inspection, the GOP nominee’s name was literally nowhere to be found on any of the official campaign signage distributed to supporters at the event.