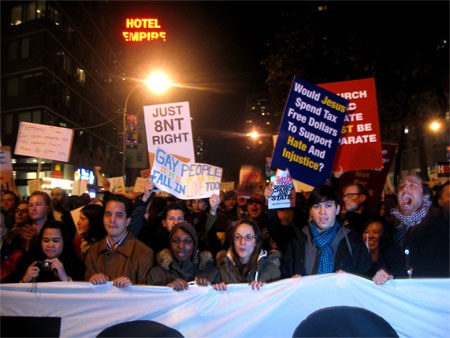 So, last night’s protest, which began at the Mormon Temple and left discrimination behind as it marched down Broadway to Columbus Circle, was a huge success. Thanks to everyone for showing up. Crowd estimates varied from 7-10,000. There was an unfortunate report that went out on the AP wire service early on that reported a few hundred people. Those of you who were there know how wildly inaccurate that is. 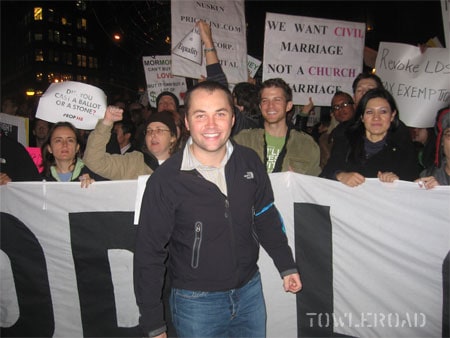 Towleroad political director Corey Johnson (above), who, with Michelangelo Signorile and Ann Northrop, initiated the entire event with assistance from several ACT UP vets including John Voelcker, later spent some time with the AP on the phone, and due to his persistence they later revised their estimate up to 10,000 based on what other outlets had been reporting.

Here’s a video of Corey directing the crowd as we began marching down Broadway.

I served as a marshal and was at the Temple starting at 5:30 pm. I met a lot of Towleroad readers, which was really cool. Hello to all of you.

Ann Northrop used a megaphone to instruct marshals on the plan. By 6 pm crowds had begun to gather in the small park opposite the temple and by 6:15 hundreds had showed up and a large circular picket line began circling the small square. Within minutes police were forced to create another picket area across the street directly in front of the Temple itself.

Chants of “Tax this Church” and Gay Straight Black White Marriage is a Civil Right” were heard as rush hour traffic pushed by on Columbus avenue. There was at least one audible “crunch” as a driver watching the protestors slammed into the back a taxi. Whoopi Goldberg appeared with a sign reading “For my Friends, Equal Rights” as the crowds also began showing up in droves. 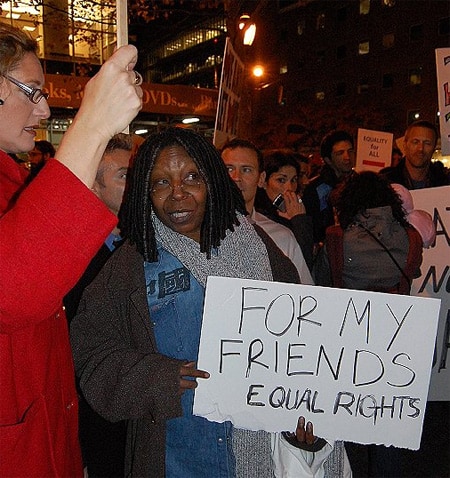 Whoopi image from a great set of photos by Bitten by a Zebra.

At this point the police were freaking out a bit as to the crowd size and expanded the protest area into Columbus Avenue. Protestors were behaving very well and the energy was high.

At a certain point the police gave us the okay to begin the march, so we corraled demonstrators behind a 75-foot banner sewn this week by rainbow flag creator Gilbert Baker, who was there (Baker also designed the stretch-sequin turquoise armbands that the marshals wore).

Here’s a great photo of the banner shot by Andres Duques, from a report on the event by gay journo Rex Wockner: 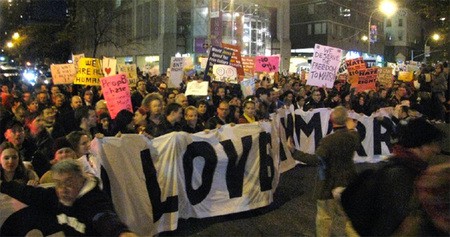 At that point I was placed just ahead of the front line of demonstrators holding the banner as we began a march down Broadway, which was closed to traffic. The enthusiasm was palpable. No incidents that I saw except for one guy near the beginning of the march down Broadway. He was actually dressed in a crisp shirt and tie (like a Mormon) and he walked across a group of protestors and gave them each a hard push before disappearing into the night.

There was also an “ex-Mormon” riding a Segway in front of the protest as it made its way down the street and he was really there for his own self-promotion and actually kept getting in the way.

The crowd moved down Broadway. As I was at the front of the line I couldn’t see how far back the crowd stretched but it was blocks and blocks I was told, and the video below by Father Tony gives something of an idea. This is one of my favorite videos of the event, because it’s just raw and it winds through the crowd which just goes on an on and on. I have a brief cameo at 5:40. Father Tony also has photos on his blog Farmboyz, plus a Flickr set. It includes this shot of former NGLTF head Matt Foreman.

Eric Leven of Knucklecrack has also uploaded a great video wrap-up of the event.

Here are the clips. Father Tony’s on the left, Eric Leven’s on the right:

We turned left on 61st street because the police thought it would be too dangerous to enter Columbus Circle directly at rush hour so we detoured and made our way down Central Park West so protestors could filter off into the southwest entrance to the Park.

We stayed at the entrance to Columbus Circle where the protest ended. It was meant as a show of force and solidarity, and as a way for folks to come together and express their desire for civil rights, and on that I think it succeeded admirably. Protestors lingered well after police instructed us to start telling people to go home. 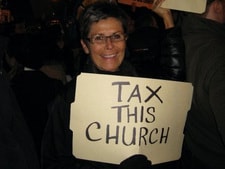 Here’s a shot of Kate Clinton from reader Charl Kroeger. More on his Facebook page.

Towleroad’s Kevin Sessums, who I didn’t get a chance to see, reports that he saw Peter Staley, Tony Kushner and his husband Mark Harris, Doug Wright, Moises Kaufman, Urvashi Vaid and Kate Clinton, Avenue Q scribe Jeff Whitty and Jake Shears as well as the elusive Dan Savage, Larry Kramer, artist Robert Hammond (and initiator of the developing High Line park) as well as composer Marc Shaiman, who led the recent charge to boycott Sacramento’s California Musical Theatre, leading to the resignation of its artistic director of 25 years, Scott Eckern following revelations of his contribution to the “Yes on 8” campaign.. 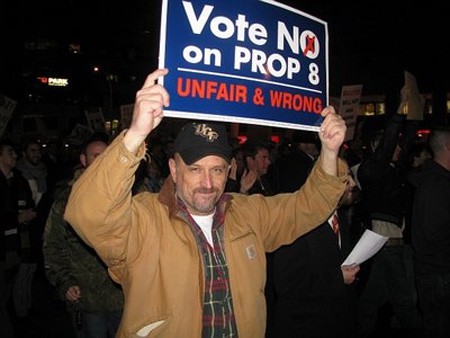 Blogger Joe.My.God (pictured above) has a fantastic set of photos which include Michelangelo Signorile, Lavi Soloway, Judy Gold, Eric Leven, Gilbert Baker, Whoopi Goldberg, Corey Johnson, and myself working the crowd (below). 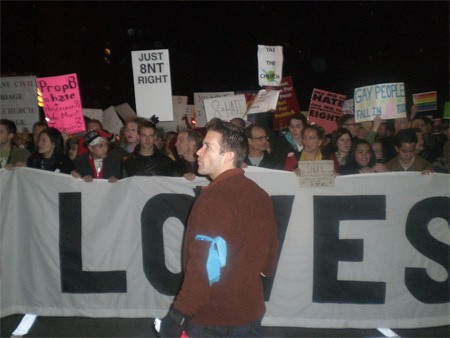 There’s also impressive coverage over at Blabbeando with video.

Here’s a photo of some interesting signage sent in by photographer Jason Rowan: 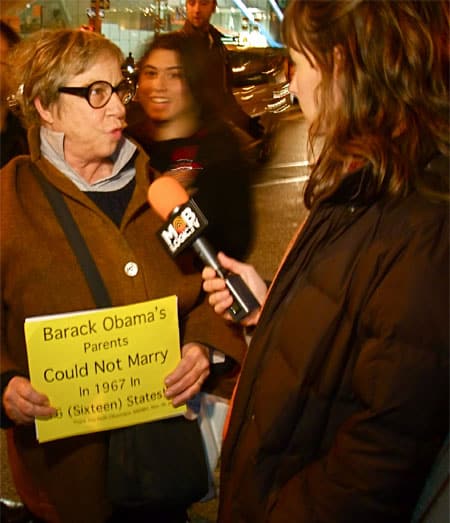 Alex K of Eat Read Play has a colorful report.

Alex Geana has posted a widget with dozens of photos. 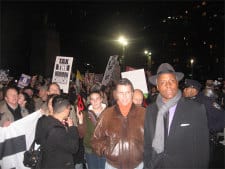 Band of Thebes has photos and reports the sighting of author Michael Cunningham.

Here’s Tony Kushner, in a photo published along with many others on the Protest Facebook page: 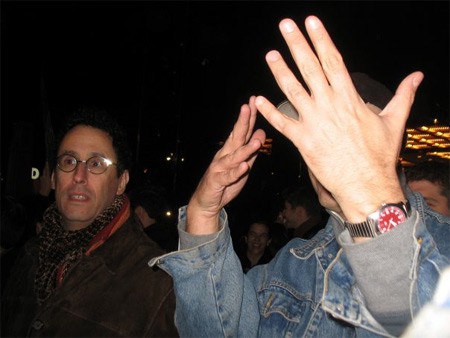 Jon-Marc McDonald has some excellent photos and video including this shot of myself (at a moment when I actually remembered I had a camera in my pocket and could take some photos) as well as Slog’s Dan Savage. He also has a shot of Larry Kramer. 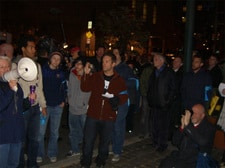 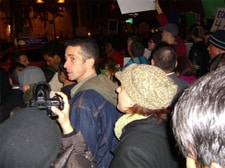 Here’s the crowd after it had reached Columbus Circle and the police began cordoning it off with plastic fencing. The NYPD were very helpful during the entire protest:

David Shankbone, who shoots for Wikipedia, has a Flickr page with lots of great stuff. 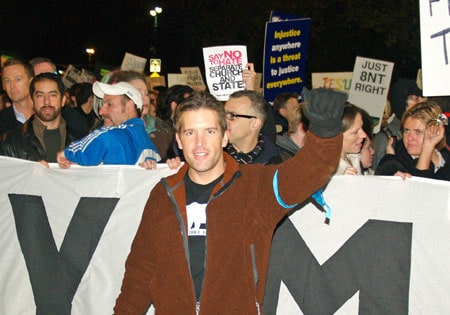 The Advocate has an excellent story by Michael Joseph Gross on the Prop 8 protests springing up around the nation as well as some photos from the New York event.

Here’s Gay City News‘ report on the event: “Gathering at 6:30 p.m. at West 65th and Columbus, the site of the temple, the crowd soon marched down Broadway behind a huge white banner saying ‘GOD LOVES GAY MARRIAGE’ made by Gilbert Baker, creator of the Rainbow Flag 30 years ago. Corey Johnson, one of the key organizers with Mike Signorile and Ann Northrop, said the turnout ‘was a tremendous outpouring of grassroots energy and support.’ He hoped that energy can be harnessed to win marriage equality in New York. Signorile said, ‘It’s about a right that was taken away, not just marriage.’ He wants those energized to demand all of our civil rights and that Mormon-owned companies such as Marriott “stop giving money to the Church.’

The protest was covered on local news – ABC, NBC, CBS, and NY1. ABC’s coverage (below) was the best imho. Anderson Cooper also mentioned it on AC360, during Dan Savage’s appearance, and Campbell Brown and Jeffrey Toobin discussed it earlier in the night I believe.

Here’s FOX’s local report. They reported 1,000 people, so they must have left early.

Larry Kramer spoke with them however. Said Kramer: “I guess we’re tired of being hated, because this is what it’s all about. Hate.”

Here’s a shot from ABC4’s coverage in Salt Lake City. They reported 4,000 people: 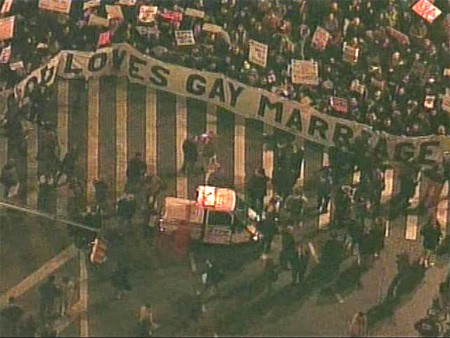 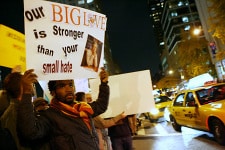 Here’s coverage from the New York Daily News: “Thousands of human rights advocates massed outside the Mormon Temple on the upper West Side Wednesday night to protest the church’s vigorous role in banning California’s same-sex marriages. After some speechifying, City Council Speaker Christine Quinn and entertainer Whoopi Goldberg led demonstrators on a flag-waving, drum-beating, slogan-chanting march to Columbus Circle. The peaceful protest drew young and old, white and nonwhite, straight and gay, most of whom smiled and waved at spectators…”

Finally, AFTER THE JUMP…a video report from the New York Daily News.

Thanks to everyone for coming. It was a great night out in New York City.