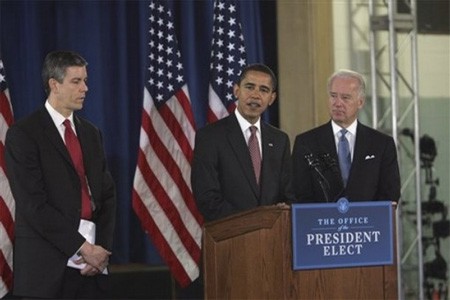 From the AP report:

“Duncan is also widely viewed as a creative policy maker. He backed a proposal in October, for instance, for a high school touted as a haven for gay and bullied youth. Backers later pulled their proposal, saying they wanted to spend another year to finalize their plans. Duncan himself has heralded his district’s performance, citing better supported mathematics, science and literacy curricula, as well as changes that offered students more opportunities to study in the afternoons, summers and weekends. He said in a statement posted on the district’s Web site that the goal had been to make Chicago ‘the premier urban school system in America.’ Chicago Mayor Richard Daley has been so pleased with Duncan’s performance that, even before the presidential election, he said he hoped then-candidate Obama would not take Duncan to Washington if he won.”

Said Duncan in October: “If you look at national studies, you see gay and lesbian students with high dropout rates…Studies show they are disproportionately homeless. I think there is a niche there we need to fill.”

If you’ll remember, Bush’s Education Secretary Margaret Spellings spent her first day on the job baring her teeth at lesbian mothers. A new day has come.

Press conference, AFTER THE JUMP…