Congressman Barney Frank announced the replacement of outgoing Senior Policy Advisor Joe Racalto with Diego Sanchez. Sanchez, a transgender man, is currently the Director of Public Relations & External Affairs for AIDS Action Committee of Massachusetts and this past August was the first transgender person appointed by the DNC to the Platform Committee, according to The Transadvocate. They also note that he is a member of the Human Rights Campaign’s (HRC) Boston Steering Committee and the HRC Business Council. 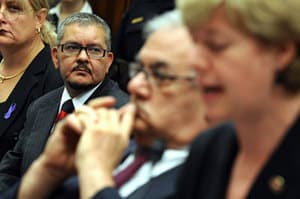 They report: “Breaking with most transgender activists, Sanchez has also continued to work with the HRC (even though they are one of the few organizations that do not oppose a gay only ENDA). Some worry that the HRC and Barney Frank will use Sanchez as cover for their continuing support of the two bill strategy…Sanchez may be a buffer for Frank to the GLBT community, but his background will also help in some important policy arenas.”

Writes Autumn Sandeen at Pam’s House Blend: “Honestly, I’m quite pleased at this development. I don’t expect miracles to happen with regards to federal gender identity and expression inclusive legislation because of this hire, nor do I expect Rep. Frank to completely embrace a fully inclusive ENDA just because he hired a Latino transman. However, my trans peers and I, as well as the broader LGBT community and our allies, can find progress and hope within Rep. Frank’s hiring of Diego Sanchez. If nothing else, it’s a strong statement about Sanchez’s qualifications, as well as about Rep. Frank’s commitment to equal employment opportunity — at least within the federal workplace.”

Sanchez spoke at the most recent HRC Dinner in San Francisco. Sanchez crossed picket lines (unlike a number of prominent San Francisco politicians) of LGBT protestors to do so. Watch his speech, AFTER THE JUMP…

(image by Tom Williams via HRC)