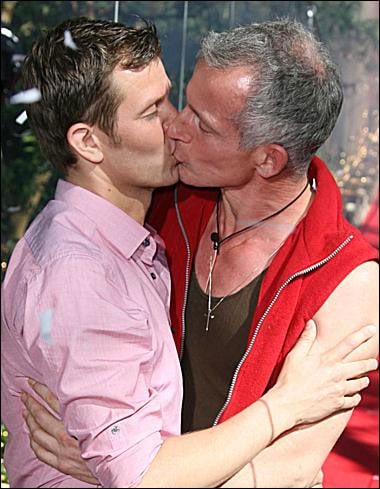 Britain’s gay former top cop and former London mayoral candidate Brian Paddick, who has spent the last few weeks on the UK reality show I’m a Celebrity Get Me Out of Here, was kicked out of the jungle camp last night:

“Brian and Star Trek legend George Takei, 71, were voted in the bottom two. George consoled him and gave him a kiss after the result was announced. Brian said: ‘I thought George might have more support. I thought I’d pick up a few more votes for sleeping in the jungle jail.’ Asked why he went on I’m A Celebrity, Brian said: ‘For a long time I’ve done serious stuff — 30 years in the police. So I thought why not do something trivial? I’m going to spend time with my wonderful partner but I won’t go into details.'”

The former top cop had no qualms about baring all on the show, either.

Paddick was greeted upon his exit by his longtime partner Petter Belsvick. The two are planning a civil partnership.

Watch his exit, AFTER THE JUMP…